We have had more snow in the last few days than in the last ten years. This morning we woke up to find there had not been any more over night so on went the washer. I cleared the path to the outside airer and put out the washing. I think I was being a bit optimistic. The sheets nearly dried but everything else just got cold. It was an interesting experiment. 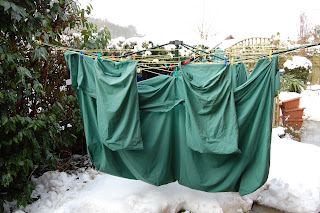 To add to the excitement of the day the doorbell rang at 07.50 I struggled into my dressing gown and opened the door to the man who was delivering a victoria plum tree.
"When am I going to be able to plant that?" I asked.
"I should wait till it thaws," he replied. See below for the area where it is to be planted eventually. 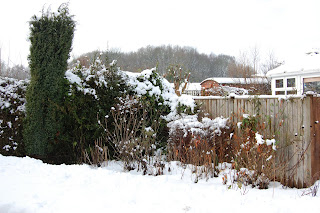 Enough about the snow back to the cross stitch. I was given several lovely charts for Christmas and I managed to finish "Frosty Nights" earlier today. It is by Lavender Wings. I followed the designer's advice and stitched the blending filament on top of the stitches. It certainly makes it sparkle but it does mean you stitch some areas twice. I am going to make it into a bellpull using one of Framecrafts which I will probably get from Sew and So. 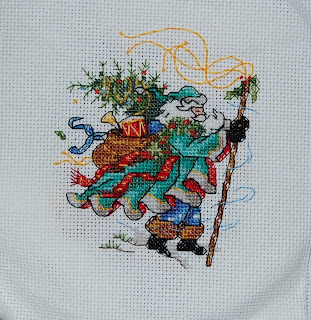 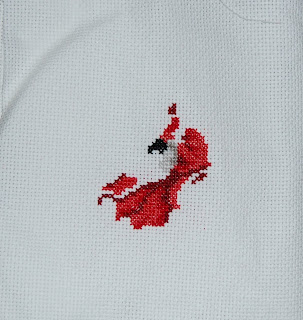 I thought you might like to see one of the ornaments big brother. This was more fun to stitch than the ornaments. 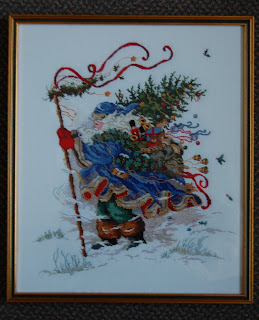 For "Lord of the Rings" fans Gandalf is nearly up to his neck in snow. 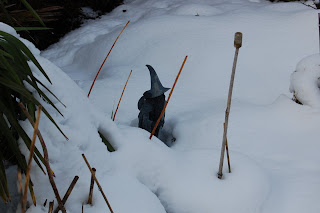 Welcome to this blog Fiona. I am off now to start the first of Victoria Samplers "Four Elements" series. I only came onto the internet to refresh my memory about Kloster Blocks and got sidetracked. Bye for now.
Posted by grannyanne at 08:44