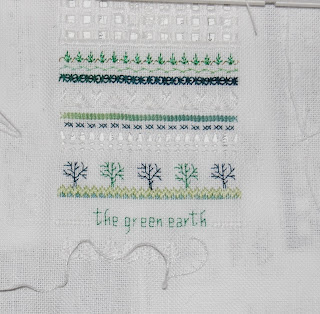 I haven't managed to finish "The Green Earth" because I have been trying hard to get on with the Peacock Tapestry see http://ufotofinish.blogspot.com/. I am enjoying stitching the Four Elements very much because there is such a variety of stitches and threads.

My sister came for the weekend and we indulged (although I am not sure that is the right word considering the problems we had) in our other hobby, making historical costumes for children. 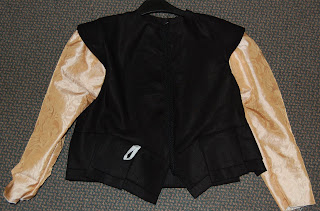 We are making four costumes, two large and two smaller, which are roughly replicas of the clothes worn by two children on two seventeenth century dummy bosrds. These costumes will be worn by children on an educational visit, because the costumes have to be put on and taken off easily they open completely down the back. A problem is that they are often put on over bulky clothing in the winter, school sweatshirts for example.

We don't have any patterns but cut out of old newspapers the pieces we want, ordinary patterns, if there were any, won't do because the armhole has to be large to accommodate their own sleeve and one size must fit all! We had completed the collars on an earlier visit and were now starting on the main parts. They are black, which has not photographed very well in artificial light, with different coloured sleeves. We have photographs which we work from and enlarge on the computer to try to see more detail. We found by doing this that the boy's costume has double skirtings which you may just be able to make out on the photograph. The fabric we have used is a linen cotton mix with silk taffeta for the sleeves. The little white loop that you can see will hold a lace edged linen handkerchief. The girl's costume has the skirt attached but no sleeves added yet. This costume has rounded tabs on the shoulders and waist. I hope to add a photo later when the light is better. The costumes will have to wait for a month before more work on them because my 45 year old Bernina sewing machine is a little reluctant to go through many thicknesses of fabric these days. My sister's Janome has no problem but then it is many years younger.
Happy stitching of whatever kind to anyone reading this blog.
Posted by grannyanne at 09:57