A finish and a start.

For those who are followers of Speedy Stitcher's UFO blog you will know I have been working hard on the Peacock Tapestry. I am pleased to say it is finished.
With the help of encouraging comments and the purchase of The Wool Gatherer by Shepherds Bush which I could not start before the tapestry was finished I managed to get it done before Easter. 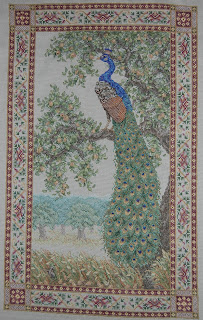 What a joy it was to open my new kit. Then the problem started. It took me close on two hours to sort the threads. If I had not had the DMC colour swatch I don't think I could have managed it. When all the colours are together they look so alike yet when you have sorted them you wonder why you had a problem. I have made a small start and it was great not to have to prepare any blends. 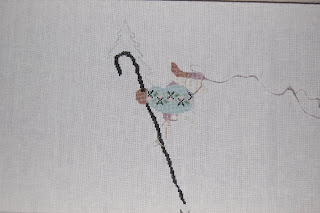 I intend doing this alongside Chatelaine's Alpine Seasons Garden now that I have collected all the threads etc needed for the design. Happy stitching and Easter to you all.
Posted by grannyanne at 06:34 6 comments:

TUSAL and Before the Last Wind Down 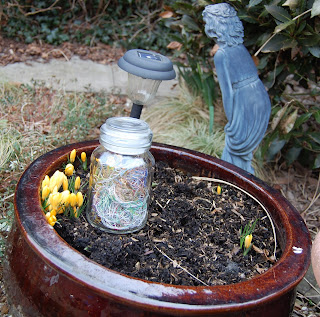 Unfortunately I haven't any shamrock in my garden so I thought I would go for a crock of gold but the sun went in and the crocus closed up. Perhaps the little girl at the back is looking for a leprechaun! My TUSAL seems to be filling up quite quickly possibly because of the wastage from frogging and making blends for the Peacock Tapestry.

I am about to make the last wind down on the peacock tapestry and I am putting a photograph in which, hopefully, will be the last before I can show the completed project. What a happy day that will be. 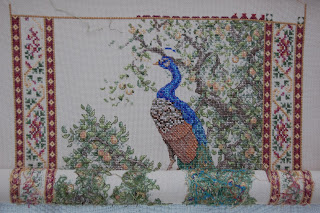 Because the two projects I am hoping to start when the tapestry is finished are large ones I have bought the 12 teapot designs from JABC and I have made a start on March. I think it is meant to be a crock of gold and you can just see the outline of the shamrock appearing. 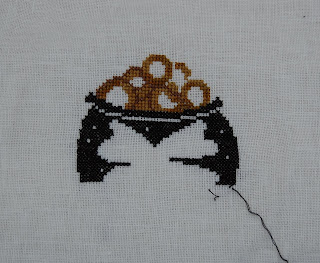 On a completely different subject altogether I think we may have had a disastrous winter in the garden. It looks as though our huge New Zealand Flax, which flowered for the first time last year, has succumbed to the hard frost as has one of the bottle brush plants. The sweet bay has been badly affected but we think they will survive. We are half way through March and not one daffodil in flower yet, so much for global warming.
Happy sewing and gardening everyone.
Posted by grannyanne at 10:41 3 comments:

Last weekend was one of those you prefer to forget. My sister and brother-in-law had come for the weekend so that we could get on with the costumes and that was where the trouble started. We were working on the girl's dress and it would not go right. It was frogged so many times we just could not believe it. We pressed it, we tacked it, we unpicked it and still it would not lie properly. At half past four on the Friday we discovered the router had called it a day. Husband and brother-in-law dashed into town and bought a new one. My sister carried on sewing and I fiddled with the new router with help from everyone to get it going. At half past seven my sister called it a day, the skirt was still not right but with the help of AOL my router was working. Hurray!
On Saturday morning I found that I could not get onto the internet on my tower so another call to AOL and the problem was quickly sorted. After that the day went well. We tried a different approach with the skirt and we were able to finish the costume. We finished the boy's on Sunday.
When you look at the photos you will see that the boy's has skirts too, this is because boys were dressed in skirts until they were 6,7 or maybe 8 years old. Today's children find that very amusing. 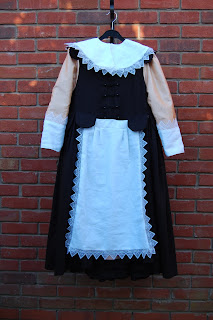 
Sunday began well and we were sewing quite happily on the two smaller outfits. My brother-in-law had gone playing golf and my husband was off for the day doing his volunteering.
As lunchtime approached I put my top oven on to do a pizza for my sister and me. What I had not realised was that my husband had put my plastic chopping board in there. Have you ever cooked a chopping board?

I opened the door to put in the pizza and was faced with something out of Doctor Who, a heaving bubbling mess of melting plastic. Some time later and after a great deal of help from my brother-in-law, who had returned from golf, it was all cleaned away.

Enough of all that and back to the sewing. I collected mt "Four Elements" pictures from the framer's today and I am really pleased with them. 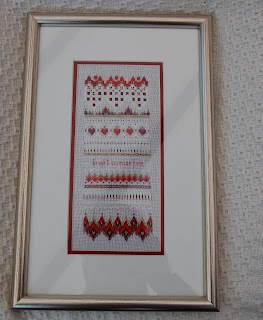 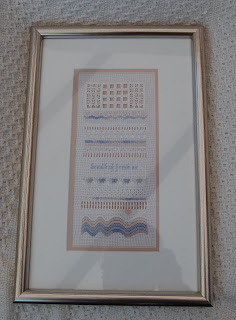 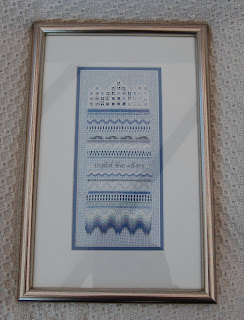 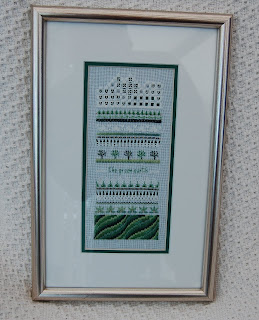 Apologies for the reflections.
Here is the photo of my latest update for Yoyo's Christmas SAL. I am on target for this at the moment. 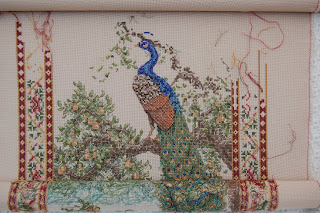 This tapestry is taking up most of my sewing time at the moment but I hope to do one of my JABC teapots this weekend. Happy stitching everyone and thanks for visiting.
Posted by grannyanne at 08:50 4 comments: